For a fantastic end of the year in Wien!

The end of the year has an extraordinary atmosphere in the Austrian capital, which you should not miss at least once in your life. The San Silvestro course in Vienna's Old Town, in front of the Rathausplatz and the Prater, guarantees a truly entertaining entertainment. At midnight, there will be a great fireworks show, which will accompany you in the new year with a must-see atmosphere! 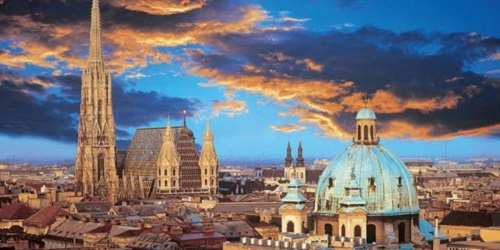 - December 30: Meeting of the Participating Lords in place and time to settle, accommodation by coach GT and departure by motorway, with lunch break along the free lunch route, direction Vienna. Arrival scheduled in the afternoon. Accommodation at the hotel and time available for guided city tour. Stunning Austrian capital from the glorious imperial past. If the strategic position was the cause of the invaded invasions of the Ottoman army, its location in absolute empires has left the city a cosmopolitan spirit and an impressive monumental structure. Dinner and overnight at the hotel.
- December 31: after breakfast, continuing the city guided visit and entering the Schonnbrunn Palace. The castle of Schönbrunn was the seat of the Imperial House of Habsburg from 1730 to 1918. The name of Schönbrunn was given to him by Emperor Mattia, who during a hunt in this area discovered a source of clear water from whose name is schön brunn ("beautiful source") and is around this source, according to tradition, which would then be the whole castle. Lunch in the restaurant. In the afternoon, time available for personal or relaxation tours awaiting arrival of the new year. Dinner at the hotel and free evening. The old town of Vienna is transformed into a huge outdoor party. The New Year's Path, which, starting from Vienna's Town Hall Square, winds through the narrow streets of the city, will ensure the utmost of fun. Here you can enjoy 80 different punch kiosks and culinary specialties. The atmosphere will be electrified by stage arrangements where several shows, concerts of waltz, rock and folkloric music, as well as performances of operettas will take place. Overnight at Hotel.
- January 1: after breakfast departure for the return journey with stop at Klagenfurt for lunch at the restaurant. Expected return in the evening.-